Note from Home: Celebrating Our Legacy 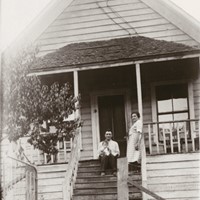 93 years ago (July 22, 1927) my grandfather signed the papers on the purchase of a home, vineyard and shuttered winery near the town of Geyserville in Dry Creek Valley, Sonoma County. I often wonder what the day was like-did it hold trepidation for him and his young family? Were there hopes that Prohibition would end soon and they could make a living selling wine? Or would they move on to something else? The legacy they created that day spans four generations and 9 decades here in Dry Creek Valley!

My grandparents, both immigrants from northern Italy, came to the United States separately in the early 1900s. My grandfather arrived along with his sister Caterina (she later died in the 1918 Influenza Pandemic) and found work around the Placerville and later Redding area. My grandmother came with her mother and sister to meet my great-grandfather who had found a place in Redding CA.

My grandparents met, as the story goes, when my grandfather was selling vegetables to local businesses and met my grandmother when he called on their hotel-just about 10 years after they had arrived in the United States.

They married, settled in Dunsmuir, and a few years later they pulled up roots and moved to Geyserville leaving behind family and friends. Giovanni & Julia arrived at the new property with three children between the ages of 7 and 2 years old along with all of their worldly possessions. In light of history it was a challenging period with Prohibition in full swing and the Great Depression following just two years later.

During this COVID time of sheltering in place I have to imagine it was almost the same feeling as we have now:  being cut off from family and friends, striking out into new territory, not knowing what will happen in the next weeks and months. There weren’t many neighbors to begin with, the town of Geyserville was three miles away and they didn’t have friends nearby.

The beauty of this story comes with the knowledge of the hard work it took to overcome the odds and to wait patiently for the times to change. It was another 6 years of Prohibition before it was Repealed and almost 10 years for the Depression to end.  All the while supporting a young family which welcomed one more child in 1932, my dad Jim.

They started by first selling the grapes to head of households in the area and launched a new family business of making wine in 1934. The ensuing years saw many changes in the way the family worked the land and made wine. I stand in awe of what they were able to achieve from there. I must remember what it took to get through those times because, like all of us, I need the reminder of better days to come.

If you would like to take a trip down memory lane click here for our history gallery.