A few months ago my sister Lisa made a suggestion to write about our staff and their connections by using the PBS series “Finding Your Roots” as inspiration. So far Manuel Diaz, Polo Cano and Gary Gross have been profiled.

The last three interviewees all came from climates with extremes-the desert or bitter cold winters. Montserrat ‘Montse’ Reece comes from Catalonia Spain where she compares the climate as very close to Sonoma County’s. There is a similarity between Montse’s home in Spain and home here in Sonoma County. They are nearly equal in temperature and geography with marine influence from either the Pacific Ocean or the Mediterranean Sea. Later on when her path took her to California this made for an easier transition, weather wise. Culturally too because we are as focused on wine and food as Montse’s home in Spain. 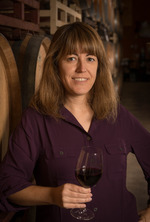 seems she was almost predestined to become a winemaker. Her father encouraged her to follow this path and she received her degree in Agricultural Engineering with a specialty in Oenology from Universitat Rovira i Virgili. During her first year at university, in order to make money, she worked in a Cooperative winery in the Penedes taking directions from the winemaker over the phone. She finally met him for the first time at the end of harvest. There she processed white wine grapes for making the base wine for Cava. The rest of the time away at school she spent at Montblanc in the Priorat region making red wines. She gathered her years of experience and, once graduated, made her way to California.

She came over in 1998 to intern at Gloria Ferrer and spent the harvest grape sampling, analyzing those samples, riddling bottles, and general cellar work. She loved the area so much she stayed on and was next hired at Ferrari Carano where she worked in the lab and cellar. She married Pat Reece in 2001.  Then a stint at Rodney Strong as enologist for three years followed before being hired at Pedroncelli as assistant winemaker.

The 2007 harvest was the first here and she trained under John Pedroncelli for the next 7 harvests learning the ropes, sharing her knowledge and getting to know the ‘house style’ as well as the estate vineyards and vineyards of our grape growers.

Her passion is microbiology. Finding the right yeast for the right wine is her focus. It is also where she and John differed in their approach to making wine. They discussed and considered which blocks or vineyards needed a specific yeast to bring out the best in the wine. She quips, “Every yeast has its’ own personality much like people do. Using a particular yeast complements the fruit and style bringing the best results.” My favorite example is her use of Barolo yeast for our Bushnell Vineyard Zinfandel. She’d notice when the grapes were brought in they needed a slower fermentation to get the right balance of aromas and flavors. Use of this yeast slows the fermentation down significantly and the proof is in the glass-a beautiful expression of Dry Creek Valley Zinfandel with spicy pepper and ripe berry notes.

2021 marks the 15th harvest for Montse. As she prepares for harvest she talks about what she looks for in the fruit as the samples will begin to come in to her lab in a couple of weeks. When sampling a vineyard the berries or bunches are picked over a wide swath of several vines as well as different spots on the vines. Her decision about when to pick is to seek maturity without over-ripeness. I have called it picking on acidity but that isn’t quite the point. It is when the acids and the sugars have harmoniously come together maintaining the aromatics, the flavors, and the structure of the building blocks for a great wine.

Thinking back over her first experiences here she says, "As a Spaniard I had never tasted Zinfandel. The flavor surprised me as it was like nothing I had tried at home." She first tasted Zin back in 1998 when the couple she was staying with, who also worked at Ravenswood, sent her to try the wines. She fell in love with the grape. And to end up at Pedroncelli where she makes four versions of Zinfandel is kismet. She continued, "Zinfandel matches the Pedroncelli personality perfectly."

On the homefront, she and Pat adopted their daughter Marian seven years ago. And Montse maintains one family tradition started in Spain: she makes Paella every Sunday, no matter what.

In the good timing department, my friend Cindy Rynning of Grape Experiences interviewed Montse recently and included a few of our wines.