Climate and other aspects of weather remain the focus of my posts with El Niño in my sights today. When you are a weather watcher like me, with vineyards hanging in the balance during our four years of drought and as we hope and pray for more rain, the conflicting reports about whether El Niño weather is going to stay strong or fizzle out are frustrating. Just last week a headline declared the end of El Niño and this week the media is back at it, trumpeting the amount of rain dumped on Northern California, indicating the pattern is here to stay through March. Hmmm. Once I did a bit of digging around for more information it all made sense, thanks to two websites I visited: WattsUpWithThat.com and GGweather.com (Golden Gate Weather Services). While there is definitely an El Niño pattern it may not be the strongest. And for heaven’s sake don’t call it a storm because the definition of El Niño is our overall climate is affected by the warming of the waters near the equator outside of Peru which in turn influences the storm patterns over our region. I also read where we have received the most rain in this month, which has 10 more days left to record the amount, than we have in the last 6 Januarys (!).

The world of meteorology has changed quite a bit since the largest (97/98) and second largest (82/83) El Niños were recorded. Back then the media reported on the storms but nothing like the technology we have currently. Recalling predictions over the last couple of years they contain almost to-the-minute, accurate target areas, and length of storm information and are correct 99 out of 100 times. One thing is for certain though, this winter will not make up for the years of drought but it is more than a drop in the state’s bucket. I'll splash a drop of Zin in my Dino to El Niño!

One of the things we do at our vineyard is spread straw to help with the erosion that comes with the storms. 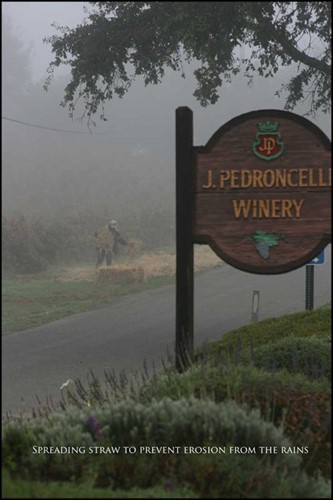