Ullage-it's not a town in Sweden

First I’ll define the word ullage. We use it in the wine industry to describe the loss of wine due to evaporation while the wine ages in barrel or bottle. For example, when someone writes to me about their 1974 Cabernet and they want to know how it’s doing, one of the first questions I ask is to describe the fill line on the bottle. We call that ullage-the level at which the wine is located in the neck of the bottle indicates loss of wine over time and determines whether the wine is spoiled or not. It is the same in a barrel except instead of an ounce of wine lost it is more like 1-2 gallons every 3 months-when the cellar crew tops each barrel and continues the aging process. However even at this cost (in wine) the act of barrel aging does concentrate by the slow vaporizing of water and alcohol. Why do you think a barrel room smells so good? It’s all about wine vapor. And in either case, if too much air gets in, spoilage will occur at an even greater cost-that of the entire contents turning into vinegar. Another form of loss is in the lees. You’ve heard of the term ‘dregs’ and this is what you get at the bottom of the barrel-dead yeast cells, a byproduct of aging. These dregs are not used and are, after the wine is removed, washed away-as in the photo below. Oak (and cork) is permeable and ultimately, even though a little air is a good thing, the benefits outweigh the loss of product. Hmmm, I’m ready for a glass of red-preferably a nicely aged one! 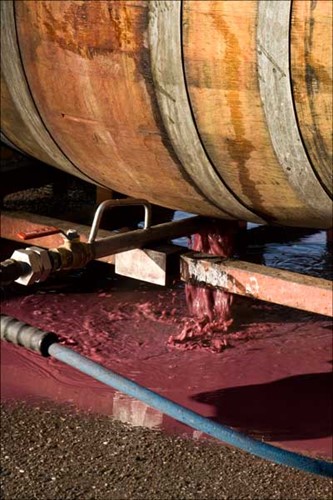