If it is February then it must be barrel time. This is one of the busiest months in our barrel room for the cellar crew. Led by Hipolito Cano, our cellar master, the 2014 wines that have aged for one year are being emptied to make room for the new vintage of 2015. An important aspect of our barrel room is its’ temperature especially while aging 2000 barrels.

Rule of thumb for cellar temperature is more or less 55 degrees Fahrenheit. This is used for keeping barrels at the right temperature for slowly aging the wine during its 12 month stint. For bottled wines you’d like to cellar this is also the rule. In the case of barrel aging, if the temperature is higher-let’s say by 5 or 10 degrees, the wine would age faster than if kept at a lower temperature. Too low and it will slow it down even more but not give those microorganisms that age the wine the right temperature. The same can be said for that bottle of Cabernet Sauvignon you’ve been aging.

If you have followed me for a while you’ll know I reference Bern’s Steakhouse in Tampa Florida. If you are a wine lover make this part of your bucket list. Some of the wines on their list go back to the 1800s and they are in great condition. The reason? The cellar is kept at a very low temperature-40 degrees. They give you a tour too-take a parka! So we’ll keep our cellar at just the right temperature. Now for a splash of Cabernet in my Dino, cellar temperature of course!

Today's temperature-taken after barrel work. The temperature will go down as the evening sets in with vents opening to the night air, capturing natural air conditioning. 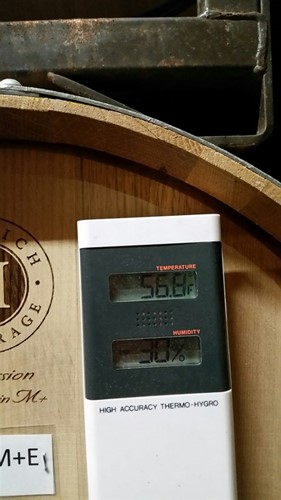