The tale has been lost to history as to why my grandparents bought 90 acres, mid-Prohibition, in 1927. I think it is because my grandfather wanted a piece of land he could call his own after working on other farms and dairies once he had arrived in the U.S. as a teenager. The property included 25 acres of vineyard, a home and a defunct winery. It was sold by the Canata family who could no longer shoulder the debt of owning the land-and there may have been more to the story there as well, also lost to history. Even though Prohibition began in 1919, if you still grew grapes you could sell them to home winemakers if they were a ‘head of household’. Each household could make 200 gallons of wine per year. Now let’s think about this for a moment: this totals about 4 gallons per week. 20 bottles a week, or just shy of 3 bottles per day. Big families? Tradition? Thirsty? Many of these home winemakers had wine in their DNA-or at least were accustomed to enjoying wine with their meals every day. They at least kept some vineyards growing through this period and helped support my family. It also helped wineries reboot once Repeal rolled around. Statistically, the story is a sad one for Dry Creek Valley. Before 1919 there were 17 wineries making 1.5 million gallons of wine. Business was booming and then the hammer came down. Many of the vineyards were taken out and planted to prunes and other orchard crops. While there was still a market for wine grapes the bottom fell out by 1925 or so. Gratefully December 5, 1933 ended this nationwide dry spell and we were poised at the right time to enter the winemaking business. Only 2 other wineries survived the next decade and it wasn’t until the 1970s when our valley saw a resurgence of wineries and vineyards. From my Dino to yours, let’s celebrate 81 years of Repeal! 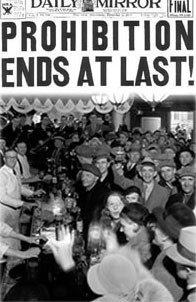