Pressing matters. Literally. Once the red wine tank is done with its’ primary fermentation it is time to put the young wine through the press which separates the skins and seeds from the newly fermented grape juice. The skins and seeds are conveyed away and are now known as pomace. The pomace will be spread around the vineyards in a year, after it has taken the cure under a tarp.

Once the pressing is done the wine is transferred to another tank for its’ secondary fermentation. This is known as malolactic fermentation and turns a somewhat harsh acid to a milder one. Think tart green apple (malic acid) turned to softer butter-like acid (lactic) by introducing lactic acid bacteria. If you have heard of ‘buttery’ Chardonnay it is likely it underwent malolactic fermentation. In red wine the process is there to do its’ job of making the wine more palatable. How long does all of this fermenting take? 2-3 weeks typically. We’ll be finished soon-and then the wine will rest before being transferred to barrels in January. A toast to the harvest and all the people who made it happen!

This is a shot from harvest in 2006 of Humberto De La O (now retired) is pictured here overseeing the pressing of one of our red wines. Photo credit: Hipolito Cano, Cellar Master. 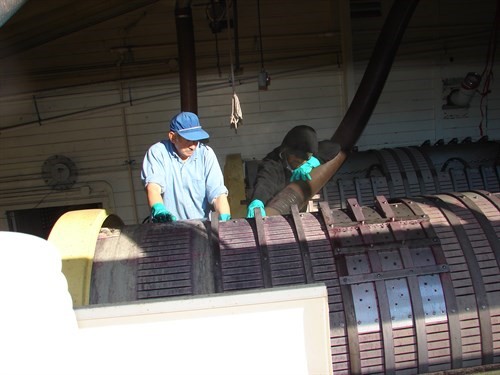