His first harvest was 1990 having spent the previous two years out in the vineyard. He says it was a ‘pressure cooker’ situation because he had to learn as he went along. Going from tanks to presses to crushpad he did his best to keep up with everyone too busy to stop and explain. He became a quick study.

John Pedroncelli always advocated the team effort. He noted the cellar crew is great and it is a plus having a team that has a few years of experience behind them. It is like a well-oiled machine and they are motivated to get the task done and lend a hand when needed. He compared harvest time to being a singer and having stage fright right before going on stage-the happy day is coming and once it is here you begin to sing and everything is in tune. You find the melody and keep singing.

It doesn’t matter how prepared you are, harvest always takes us by surprise. Each year is a new challenge but I’m eager to take on the challenge.

From early to late harvests it’s the best part of the year. There is more of a laser focus because you are doing one thing at harvest-picking grapes when at other times of the year you are multitasking. Harvest focuses the efforts on one thing: grapes which are the foundation of wine.

He noted there are lots of characters when it comes to our history of grape growers and cellar workers who have been part of our harvests. One grower brought their grapes in an old truck bed on top of their pick up-a challenge when it came time to empty the grapes into the crusher. We were often the first place growers sold their grapes to and some have stayed and others moved along to other wineries or even started their own winery.

He remembers the first time we received machine harvested grapes and reminisced that John Pedroncelli didn’t like the quality in the fruit. He noted machine harvesting has come a long way in preserving quality but back then it was pretty rough and created lots of juice and fermentation happening before the must went into the tank. He also feels that white wine varietals can handle being machine harvested while red wine varietals seem to keep better quality when hand-picked. Every vintage brings different challenges (weather, low or high production, rain, heat) and is expressed in our wines and is due in large part to hand picking our vineyards.

It was 1993 and her first harvest experience was while studying winemaking at university. It took place at a small wine cooperative in the Penedés. She had one other cellar guy working with her and the winemaker was 100 kilometers away-but she had his phone number! She learned a lot by her experience there bringing in white and red wine grapes and making all the decisions about fermentation. She called the winemaker many times for guidance and ultimately the wines were guided by her hand.

She is married to Ferrari-Carano Winery's maintenance manager Pat Reece so harvest is a time to balance their lives-they have a seven year old daughter Marion who needs time with Mom and Dad. Sometimes she comes to work on Saturdays and experiences a work day with mom.

The first year she worked with John Pedroncelli they were talking about when to bring in the grapes from a particular vineyard. It looked like Sunday would be the best time to harvest them but John advised Montse: “People are first.” He felt giving them a day off, after working so hard, would be best. “The grapes will be fine-we’ll harvest on Monday.” She says he was revolutionary because he didn’t push people over their limits and this concept is very unusual during the busy harvest time.

A toast to our winemaking crew-with some Sauvignon Blanc in my Dino-since this is the first varietal we pick each harvest.

Here is a throwback photo since John was an integral part of putting the team together. Here he is amidst his 'crew': Hipolito, John, Montse and Lance. 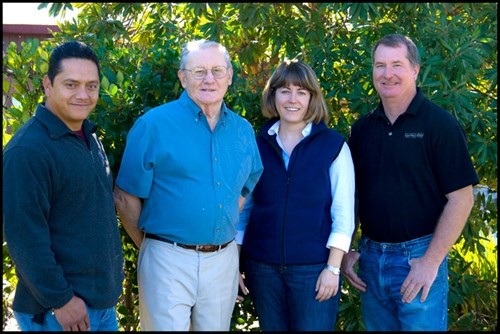