Picking grapes at their optimum ripeness level is very important to the vineyard manager as well as the winemaker. While we seek balance overall in the fruit we harvest, today’s post is about what those grapes are put in once cut from the vine.

I remember in the 1960’s watching pick-up trucks bring the harvest to the winery weighed down with boxes of grapes. These grape boxes were used many years ago and they were wooden and very heavy-weighing in at over 50lbs once filled with grapes. Once at the crush pad they were dumped one by one into the crusher. Most of these are now gracing barns and storage as they are rarely if ever used by picking crews these days.

Plastic buckets are used now and are smaller and easier to lift because, when filled with grapes, they weigh 25 pounds. And lighter tubs means faster work between the vine and gondola. Speed is an element greatly desired by those who are picking the grapes-more boxes/buckets/tubs means more money in the bank. Once the tubs of grapes are filled they are whisked to the gondola, waiting at the end of the vine row several feet away. Speed as a runner is also important to empty the grapes and get back to the business of picking.

To give you an idea about a day in the life of the harvest here is the report from Wednesday’s crush: The following loads came in: Chardonnay from Frank Johnson Vineyards, Merlot from estate vineyards as well as the neighboring Long Vineyards. The total tonnage was roughly 75 tons, which is well above the usual amount for a regular harvest day, which is nearer to 40 tons. The Chardonnay was machine harvested but the rest was all handpicked. A toast with a splash of Chardonnay in my Dino to all the hands picking and making our wines!

A wooden grape box that typically held 50 lbs of grapes. 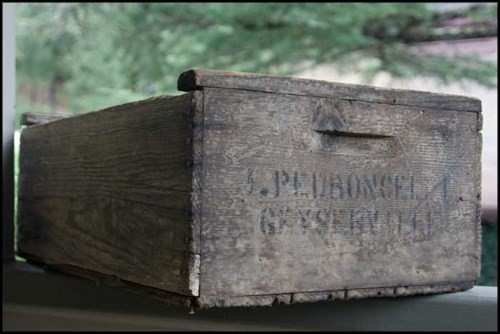 The crew in 2006, photo courtesy of Cellar Master Hipolito Cano who journaled the harvest. 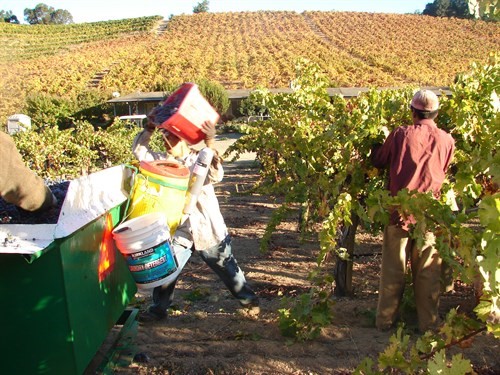