Cellar activity comes alive in January as we transfer the previous vintage, 2013, out of barrels and then fill them back up with the 2014 wines. There are two activities which help age our young wines. One is the container and the second one is the atmosphere found within the barrel aging room itself. We didn’t install air conditioning in this large building but the temperature here is regulated by vents that open to the night air, close in the morning and maintain a steady temperature throughout the year-on average 55-60 degrees. Each of our red wines are aged for 12 months. As the year progresses, the barrels are ‘topped off’ with additional wine every three months because, as it ages, a portion evaporates. Even when we are keeping the barrel room at a cool temperature we have loss, which is the reason behind aging wine in a porous container like an oak barrel. Slow oxidation over time concentrates flavor, adds character, and gives more structure through acidity-the less water and alcohol the resulting wine has, the more these shape and define the wine. There is a tipping point however because with too much evaporation, there is a chance of spoilage. With air getting to the wine there is a chance that it will turn bad, in a word vinegar. Another way of alleviating rapid loss is humidifying the room. In California the humidity level is rather low. By using these two relatively simple steps makes the wine in your glass much more complex, tastes better and is easier to drink upon release. Now where is my glass-I’m ready for some nicely aged Merlot.

The sight glass is a gauge used when emptying barrels, letting the cellar crew know when they have reached the bottom-more air, less wine and it keeps the lees at the bottom of the barrel. 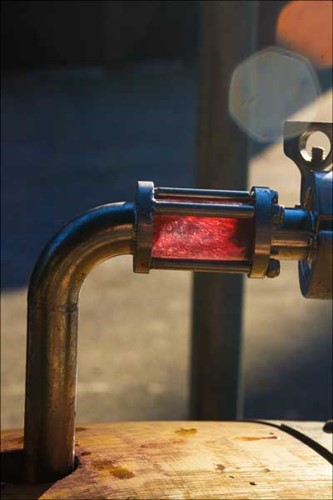