One of the fun parts of my desk job is receiving an email message or two every month about a wine someone has found or opened after it spent 20-30-40 years aging away. Here is one of the recent posts, read it and then I’ll discuss the finer points of aging red wine. From Robert Fakundiny, “On Monday I popped one of my two remaining bottles of your 1974 Cab. What a delight!  The cork broke in two but was still clean and dry on the end. I double decanted it and filtered the dregs. It opened with a good cab nose, was purple with a garnet tinge, still had some fruit, and acid and body were still there, even some tannins. (I bought them from the winery and carted them home on the plane, wrapped in a box of clothes. You could still do things like that back then.) Last night I had the rest. It had lost some of its charm by then. The fruit had fled. I suggest consuming the whole bottle within a few hours of opening, especially with knowledgeable friends. Thank you for those old, great cabs that were made in the "old" style. Now the only question is: when do I open the other?”

Thank you Robert for sending not only your experience of tasting the wine but a photo as well. I figure he bought this wine in 1977 or 1978. We had aged it for two years, first in a redwood tank and then oak barrels. It also received a full year of bottle aging before release. Robert took it home and stored his cache, opening a bottle every now and again. As you can tell by his comments this wine is slipping just a bit but notice his comments about acid, tannin, a bit of fruit that frankly wafts away minute by minute, urging one to open, decant and immediately, without pause, drink the wine. 40 year old Cabernets aren’t for the faint-hearted, their characteristics are completely different because of the length of time aging it. Our style, which Robert refers to as ‘old’, is one of the reasons the wine is still enjoyable. I must note that not everyone is so lucky when it comes to opening a wine which has decades in the cellar-sometimes the cork has deteriorated and allowed too much oxygen and has leaked thereby spoiling the wine. There are also wines that have had to overcome great odds, being stored in a garage where temperatures fluctuate beyond the preferred constant environment of 55 degrees or so. And to answer his question of when to open his last bottle? Soon, very soon because the risk of aging it much longer will outlast the drink-ability of this 40 year old Cab. A toast as we work our way to Open That Bottle Night the last Saturday of this month-what are you waiting for? 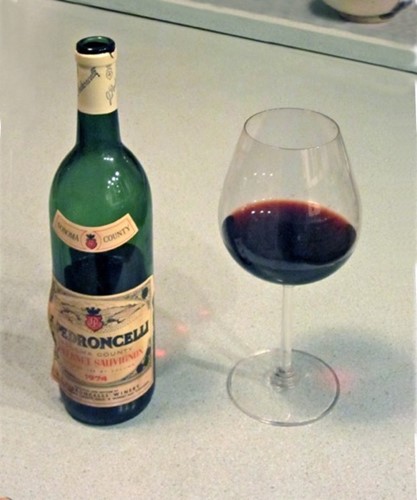