The Good: (From 2013) "I just wanted to share my experience with you. I am stuck in a bit of an aftermath from the recent snow, so I have not been able to restock in the last week. I have been dipping into the cellar reserve (and found) the 1994 Three Vineyards “Special Vineyard Selection” Cab. Needless to say, it has endured the years and poured most perfectly into my glass before I affirmed the reason I bought it in the first place." Blogger’s note: Great news! Our wines have the structure to age gracefully.

The Bad: (From 2003) "My parents are moving after more than 30 years. We found a bottle of 1973 Pedroncelli Zinfandel that had been in their cellar since they bought it. I wanted to know if that much age is good for your zinfandel. Or from 2004: "I found this bottle of wine, 1976 Pedroncelli Zinfandel, on my trash route. I was just wondering how much this bottle of wine would be worth." Blogger’s note: Sometimes we lose out because we waited too long. I usually suggest a Zinfandel be consumed 5-8 years after release especially if you like the fruit component.

The Ugly: (From 2011) "I received as a gift a bottle of your 1993 (!) Primavera Mista Original White Wine Blend and it has many suspended particles in it. It looks like the cork may have deteriorated. Otherwise it looks to be OK. Can you please tell me if this wine is still expected to be OK and if so how best for me to remove the particles in it to try it?" (From 2005) "We got the bottle of 1975 Pinot Noir out of our wine storage. The neck/cork was protected by the old lead foil. The big disappointment, the cork had rotted, and was soft, soggy, moldy and the wine ruined. The 4-5 tiny pin prick holes on the top of the foil showed no sign of wine leakage and the bottle appeared full." Blogger’s note: you win some and you lose some. These were total losses in the quality category. Some white wines are not made to age and other times there are closure failures.

The moral of the story? Open those bottles before they go bad. I’ll have a couple of more stories on Thursday and a special announcement of what bottle I’ll be opening! Open That Bottle Night: February 28. 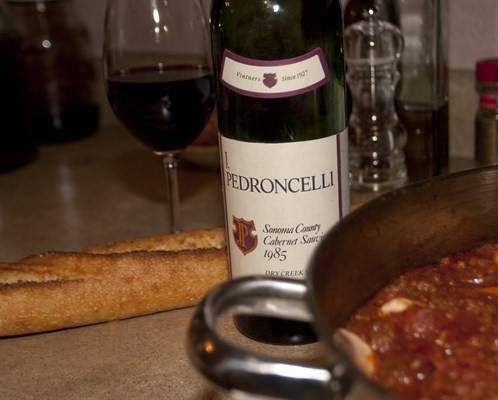