The last five weeks have been filled with exciting weather patterns from the 112 degree heat wave over Labor Day Weekend to the cooler weeks following with a few heat spikes. Natural for September-we’ve seen it all before. As farmers we all need to be prepared for weather challenges. Usually it is rain that we worry about but the heat spike that came just 7 days after the first grapes were harvested at Pedroncelli was reminiscent of a nearly identical one in 2010. We lost nearly half of our Zinfandel that year because the heat spike came at the end of a very cool summer. This year we had a hot July followed by a temperate August. Then September roared in with heat blazing. The vines and grapes felt the heat and we employed drip irrigation to give the vines much needed hydration. Many vineyards including ours did suffer from loss of juice due to dehydration especially in the Zinfandel vineyards. The crew picked the Mother Clone Zinfandel as fast as they could and dealt with shorter days due to the excessive heat. While it wasn’t as intense as the 2010 heat wave it had its’ effect. Loss of juice translates to a higher concentration of flavor in the wine-and Zinfandel was most affected because it was closest to being ready. While it is a bit early to tell, Lance Blakeley, Vineyard Manager, estimates a 25% loss for our Zinfandel production. Many other red varietals weren’t as affected because they still had some ripening to do. This one is in the books at the end of September. I am looking forward to trying this Zinfandel in a few years to see the effects of this harvest year. 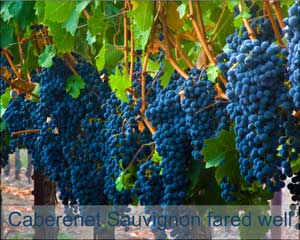