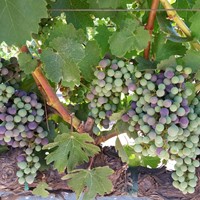 Another month into vintage 2020 and the next stage of the grape development is here: veraison. From here on out we can predict harvest dates by when the fruit begins the transition from hard green pea sized berries to a lighter softer green in the white varieties and shades of purple in the reds. I caught up with Mitch Blakely, fourth generation family member, as he was heading home for the day.

“We are watching the vines as the crop on each turns color-all but 11 acres of what we farm are red wine varieties and Merlot seems to be out ahead of the pack at 50% of the fruit turning color. Zinfandel isn’t too far behind at about 35%. Other varietals like Sauvignon Blanc, Sangiovese and Cabernet Sauvignon range from 5-15%. What that tells us is we’re looking at an average to slightly later harvest with mid-September for white grapes and lighter red wine grapes followed by Cabernet Sauvignon and Petite Sirah the first couple of weeks of October. This timing is typical of the past harvests from normal growing seasons. And of course this will change if the weather spikes higher as we get nearer to picking.”

“It’s been hot at the beginning of July so one of the other jobs I had was trying to find blocks needing water. The vines were getting slightly stressed, slowly development down because of heat although some of the days topped out at 100 degrees but tapered off as the late afternoon fog began to come in. While fairly early on in the season it is better to have the higher heat at this time. Varietals susceptible to damage during heat are Zinfandel, Merlot and Sangiovese on hillside or limited soils where they have a tough time bouncing back. Cabernet Sauvignon and Sauvignon Blanc, on the other hand, can handle it. It was unseasonably cool at the last half of July which helped the vines out a lot."

He continued, "The crop size is fairly consistent, not as big of a year as last year. Not as many clusters and counts are down-which is a good thing because it is easier on the vines. We'll see COVID harvest protocols slow down harvesting with smaller crews and split crews for picking in order to keep our vineyard crew safe. Hoping for a nice even harvest with lots of time in between. Other projects include working on the vine blocks under the Scott Henry system where they are separating out the canes and pinching them down so the arms aren't snapped off during machine harvesting (Cabernet Sauvignon and Sauvignon Blanc).  There are 20-25 acres of the split system so it takes a while-7 acres done so far and there is time to get this done.  Pulling leaves and dropping fruit (also known as green harvest) also has taken place in order to allow ripening of the clusters as well as lightening the load on the vine."

Thanks Mitch for the time and information-cheers to Vintage 2020 as it comes more into focus with each month. Follow our vineyard next month when we are in striking distance of harvest.